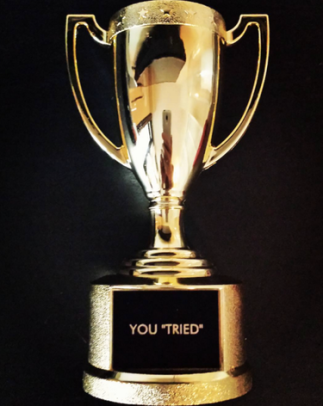 The NCAA Championship Tournament is over, The Tar-heals win again.  Who cares, March Madness pisses me off.  I don’t understand basketball and it interrupts my regular scheduled programing.  Still, I recognize the effort and drive to be the best.  To be Champions.  Victors.

I doubt there are very many left, champions that is.  In a world where every child has to be reassured that they are special and as good as everyone else, even when they lose, champions are dying away.  To spare a child the pain of defeat, we no longer keep score.  Instead of explaining that the other team worked harder, trained harder and deserved recognition, we give trophies for showing up.  We spare them the agony of defeat.

We also deprive them of the joy of striving and achieving.  No more the reward for effort and sacrifice.  Soon the Lombardi Trophy, Lord Stanley’s Cup and Claret Jug are going to be melted down or put in a museum.  We will no longer need the word champion either.  A pointless and barbaric reminder of the days when some men and women were better than others.  A time when effort and natural talent were applauded.

I worked and trained.  I competed and struggled against others.  I even won sometimes, most times.  But, I was never the Champion.  That is reserved for the best.  Sadly, it’s a dying breed.  Dying word.