The idea of counter culture has been coming back to me lately.  I’ve been thinking about the dichotomy of a group which rejects the societal standards, laws and authority, then demands that the same society protect them.  Stupidly, we do.

Look at the Sovereign Citizens, an anarchist organization that believes the existing U.S. and State governments are illegitimate.  They claim the protection of common law and use Orwellian logic and Truth Speak to argue constitutional legitimacy of law enforcement as unconstitutional.  Seriously, look it up on U-Tube with police encounters. 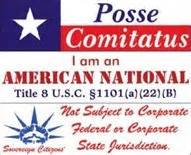 The Sovereigns do make a point, to be a citizen is willingly submit to the government.  That is a good and clear point.  Rousseau’s essay, “The Social Contract”, made the same point before the United States won it’s independence.  To participate in a society, in essence is to surrender some of your rights to the province of governance.  The opposite side of that is that to reject the society and government is also to reject it’s protections.  The constitution, amendments, laws and safety they establish are for U.S. citizens.

The right and responsibility of a governed society is to protect itself, it’s citizens.  The oath sworn by the military is “…to defend the United States against all enemies, foreign and domestic”.  Police Officers swear to enforce the laws of the land, protect life and property.  When I consider the verbiage of the oaths; enforce, protect, defend, they are violent and aggressive suited to the people and methods that may be employed.  Where a citizen may, at need, defend themselves, they also surrender justice and revenge to the laws of society.

So, do those that reject the laws and governance of society deserve the protections of that same government?  Does force majeures give us the right to enforce our laws on others within our borders, whether they accept our society and rules or not?

If you use force to resist the laws you are either a criminal or invading force and subject to arrest or destruction.  The people who go on a rampage of looting and riot as a form of protest, may not fall completely into the category of enemy of the state but they are criminals.  Attempting to justify criminal acts by claiming self-righteous anger over a perceived wrong is sophistry and not a defense.

The provisions for protecting society as a whole are allowed for within the constitution, federal and state laws.  To accept that an anarchist group has the right to flaunt those same laws degrades them.  Why should anyone expect us to surrender our moral authority and rights to defense of ourselves, our society and our government because they disagree.  You either support the society or you don’t.  If you reject the society and what it entails, you should not expect that same society to protect you.

The problem with redistributing wealth and having everyone equal, aside from how unfair it is to those who are working to better themselves, is the lowest common denominator.  That is the number that everyone is reset to so that we are all equal, it is an average down trend.  It is mathematically impossible for an average to raise everyone, so someone is reduced, in many cases dramatically.

For a family of 3 the annual income for poverty guideline is $20,090. (U.S. Department of Health and Human Services) (aspe.hhs.gov/2015-poverty-guidelines)

The group that increased in the poverty level were married families and people with Bachelors degrees.  In 2014 there were approximately 47 million people in the U.S. living below the Federal Poverty Line (FPL).  The group most heavily represented are children under 18, at 20% of their population.

A single person, earning minimum wage, working 40 hours per week, with 2 weeks vacation per year is above the FPL. That same wage is less than $100.00 per week from being above the FPL for a family of 3.

America is the Land of the Free.  We are free to worship how and is we want.  We are free to try and fail as often as we like.  Anyone can make poor (STUPID) decisions.  In the privacy of your home you can love whomever you wish and do whatever pleases you with your sexual organs with another consenting adult.

What you are not free from is the consequences of your actions.  That is what the Nanny Government and Socialist programs are trying to take away, at the expense of the other 85% of the population. Education is not the answer.  The percentage of degree earning adults has increased to 34% age 19 – 29, which is also the group growing in poverty.  Providing free education will not eliminate the un- and under employed.

If you want to redistribute wealth, get off your butt and get to work. If you are waiting for someone to hand it to you, you’re part of the lowest common denominator.

I’ve avoided this for the last couple months, Presidential Politics.  It’s like trying to tiptoe through a puppy-poo minefield in conversation.  I can’t help but to stare in disbelief as they parade across the new channels debating and criticizing each other.  Trump by himself is as enthralling as footage of the latest terrorist attack.  It’s sick.  You can’t help looking, a zit on someones nose, in your face talking to you.

If we are to believe the polls and reporters, the nation is doomed.  This morning I heard Sanders paraphrase Obama “If I can’t get the legislation through, I have no problem using Executive Authority…”  What happened to trias politica and the balance of powers?  I may be a dying breed but that seems un-American for a presidential candidate to state that they intend to ignore the Constitution, Legislature, Supreme Court and People if they don’t get their way.

State and individual rights are being stripped for political correctness.  A bar can refuse to serve anyone for any reason, but not a bakery?  If you don’t like the service, go somewhere else.  Are we no longer free to decide for ourselves?  Do we really need safe zones from words?

The age of Nanny Government came creeping up and we didn’t notice.  We were told it is for the greater good, but if you can do basic math, it’s usually for 10 percent or less of the population.  Thirty million people are without health care, force the other ninety percent to pay for it and run up the cost of medical care for everyone! Bail out the Banks and Auto Industry!  They failed at business so the nation is obligated to keep them operating.  The cars and trucks that were symbols of our nations productivity weren’t safe enough, now you don’t have the right to drive without airbags.  The right to try and fail now comes without consequence.

I want it back, the Land of the Free and the Home of the Brave.  A nation being raised and taught to stand up and fight for themselves and other.  Let’s not  force our opinion on others if they disagree or force someone else to compromise their beliefs to accept another.  I want a nation that doesn’t try to placate terrorists and criminals.  A government run on principle not polls.  A nation with an identity, where we can say the Pledge of Allegiance but you don’t have to.

When this nation collapses under the weight of trying to be everything to everyone, I hope we at least have enough identity left to rebuild.  The next civil war will make everything that has come before look like a fist fight at a family reunion.  I don’t think we love ourselves or each other enough to show restrain this time.