It doesn’t matter if we call it history repeating itself or action and reaction. Society, in general, goes through a pattern of extreme swings from conservatism to liberal thought in reaction to trends.  Post World War II, the Viet Nam era protests and Free Love movements were a sharp contrast to the nationalistic fervor of twenty years before.  Then the Regan years where we were proud to be American again.  The last twenty years have been confused. 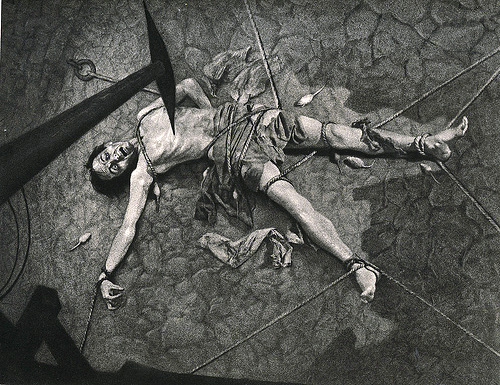 We vacillate between pride in our nation, rallying behind the government and military and despising everything that we are or have been.  As a people we can not decide if we want to protect ourselves or lay down and die for our beliefs.  Worse, we fight among ourselves because Three Hundred Million people disagree on which we should be doing.  In effect, we weaken our ability to have different opinions, because eventually laying down to die means someone else will be left in our place.

I was watching the news and started having a vision of tomorrow.  Racial strife will tear a gaping hole in our nation, riots and murder will run in the streets.  Probably in the Democratic havens like Detroit and Chicago, because they have fought for so long to destroy the elements of law enforcement and justice.  When the local government can no longer placate the masses they will rise in protest and be violently suppressed by the state and federal government.  I can already hear the screams about Posse Comitatus by talking heads that have never read the Constitution.

In the aftermath, there will be those who point out that it was the weakening of the law that allowed the situation to develop in the first place.  We will swing back to the other side, capital crimes will be punished with capital punishment.  Hopefully, people will remember that they have to work for what the want.  Peace and prosperity will replace rampant crime and expectation of entitlements.

All the while I felt like the character from Edgar Allen Poe’s, “The Pit and The Pendulum”.  Facing uncertainty only to awaken and find I am facing certain death, watching the pendulum swinging inexorably closer.  Somehow, I manage to escape that only to face walls closing in on me, pushing me to my death.  We hope to elect our own LaSalle, to rush in and save us at the last minute.  That’s the thing about good horror stories, they always leave you uncertain if you’ve really escaped at the end.

It’s taken us over two hundred years to swing back to the point of wanting someone else to be responsible for our lives.  The burden is to heavy.  We must need another King to determine the course of our lives and destiny.  By electing our new nobles, we relinquish authority to others.  Walking the center line is to difficult for us, somewhere between responsibility for ourselves and accepting the authority we relinquished to the government.